Bitcoin has surpassed the $12,000-mark for the second time in recent weeks.

In some ways, this second recent pass over $12,000 makes it seem as though Bitcoin may be establishing itself over the $12k line. However, it’s still unclear whether or not BTC can sustain levels above $12k for more than a few days–or a few hours–at a time.

For instance, at press time, BTC was at $11,989, just below the prized $12k level, but not yet low enough to truly cause concern.

And #Bitcoin has breached 12k. Great way to start the week!

It seems that many voices within the crypto space believe that Bitcoin will be able to establish itself at or above $12k in the coming weeks.

There are a number of reasons for this.

For example, last week Marie Tatibouet, chief marketing officer at cryptocurrency exchange Gate.io, commented to Finance Magnates that the price of Bitcoin may currently be growing because of “the current situation of the world.”

This includes “the instability caused by the pandemic, the stock market falling, the US and China market wrestling ‘dollar vs. yuan’, or a big fear of inflation on a global scale, just to highlight some,” she said.

Additionally, Evan Bayless, the operator of WhatIsMoney.info, also pointed out to Finance Magnates that the ongoing impact of quantitative easing could be positively affecting Bitcoin’s price. In other words, a growing number of individuals may have lost some of their faith in fiat currencies.

“The incredibly fast and drastic response of the Fed and other central banks to the COVID-induced lockdowns (and the subsequent economic fallout) has caused the idea that fiat currencies may not be a consistent yardstick for measuring value to begin to enter the public consciousness,” he said.

There are other, more immediate factors as well: Jason Yanowitz, co-founder at Blox Work Group, also pointed out on Twitter that there could be some increased visibility on BTC this week

“Grayscale is running Bitcoin ads this week on CNBC, MSNBC, Fox, and Fox Business,” he said on August 9th. “Get ready for a massive week for Bitcoin.”

Get ready for a massive week for Bitcoin.

Altcoins are also getting a boost

This latest movement over $12k follows a week of strong movement in a number of altcoins: for example, Chainlink (LINK) and Band Protocol (BAND) have both recently made headlines for their price performance. LINK, for example, soared from $8.31 last Monday to $13.58 at press time; BAND has nearly quadrupled in price with a rise from $4.13 to $16.30.

The price increases across the board have caused the total market cap of all cryptocurrencies to have reached its highest point in more than a year. 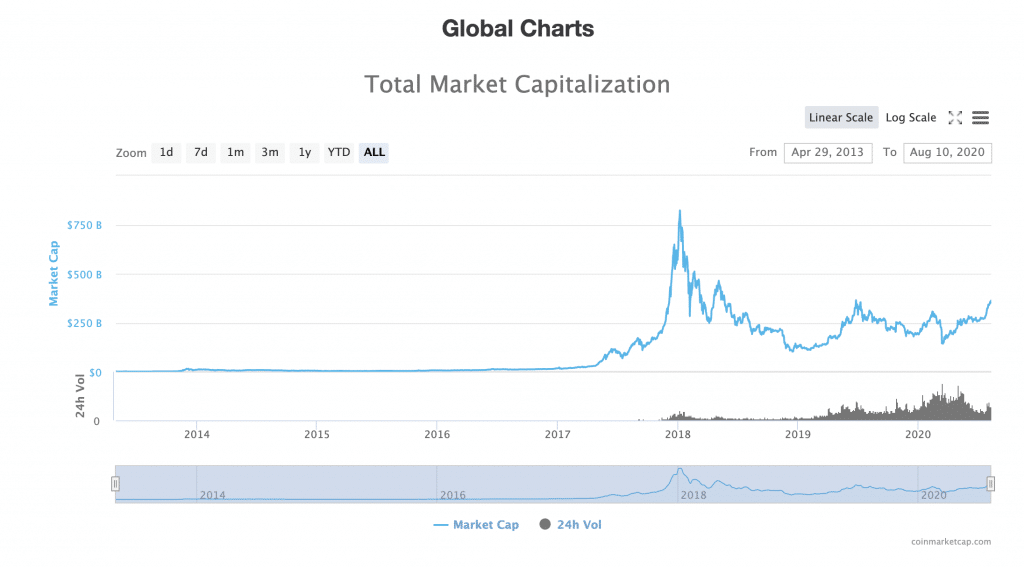