Given cryptocurrencies like bitcoin can see their value swing by as much as 15 per cent in 48 hours, it might be sage advice to transfer any gains into something more concrete.

Rich Whitehurst, 37, from Stoke-on-Trent, might have taken that advice literally.

After quadrupling an investment of around £240 in around 60 days during the previous bitcoin boom in 2017, the dad of two used some of the nearly £3,000 he made to buy a new driveway and replace his windows.

37-year-old Rich Whitehurst, from Stoke-on-Trent, quadrupled his bitcoin holding in the previous boom in 2017

Having previously mined bitcoin himself in around 2016, which caused a row with his ex-wife over the ‘drastically rising cost of our electricity bills’, he stopped ‘as the return wasn’t huge’ and instead began investing loose change through the cryptocurrency exchange Coinbase around a year later.

‘It was £10 here, £30 there, just money I wouldn’t notice, a “let’s see what happens as I won’t miss it” kind of a thought’, he said. ‘My investment quadrupled, and my mining profit had increased so it was a win-win and great bragging rights to my friends who said I was mad.’

He cashed out a few days before bitcoin crashed from a then-peak of just over $19,000 a coin in December 2017 to as little as $6,000 in February 2018, although he still maintains a modest holding which he plans on keeping for the long term.

Like fellow cryptocurrency enthusiast Chris Sedgwick, who turned £2,000 worth of coins bought in 2015 into £75,000 and bought a Skoda Octavia, Rich has turned intangible profits into intangible gains.

As well as his home renovations, Rich, who has sold video game consoles and electronics online since 2017, bought an Xbox One and kept some of the profits for ‘some everyday spending money’.

He hopes to use his cryptocurrency and other conventional investments to be mortgage-free at the age of 40. 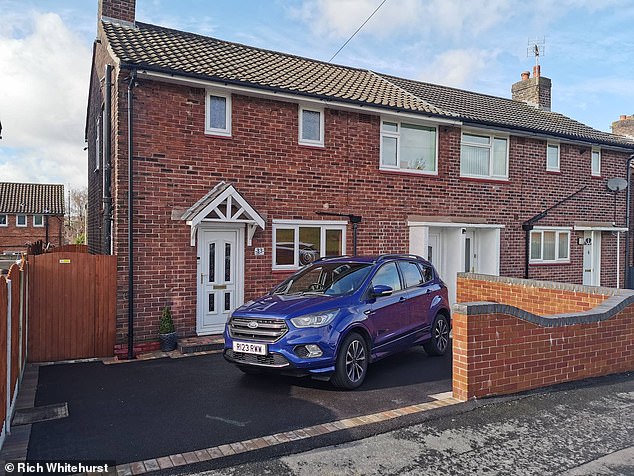 But although he remains bullish on bitcoin, predicting it could hit £100,000 a coin by the end of next year, up from the roughly £36,000, or $51,000, it sits at now, he has some advice for a new breed of investors who have bought into the latest bitcoin boom.

‘I would caution against people doing what I did without doing research, I got lucky, as simple as that’, he told This is Money.

Relatively experienced investors, or at least those who were around for bitcoin’s previous all-time high in 2017, are rapidly being drowned out by newcomers.

As many as a fifth of Britons could now hold cryptocurrencies like bitcoin and ethereum, according to a survey from the comparison site Finder, up from just 3 per cent in 2018. 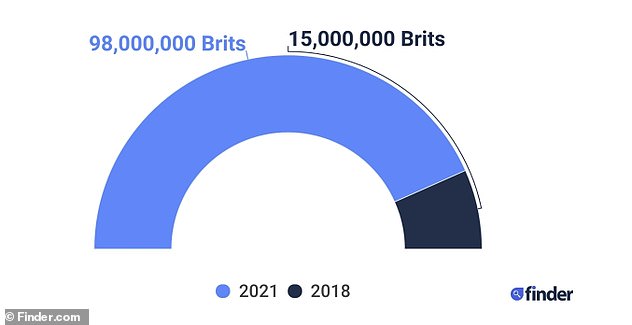 As many as 19% of Britons could potentially own bitcoin according to a recent survey by the comparison site Finder – which would equate to 15m people. However some analysts said the figure was too high

This could represent a 558 per cent rise in just three years, while a similar survey carried out by the Financial Conduct Authority published last year again found just 3 per cent of Britons held cryptocurrency in 2019.

It is likely the true figure somewhere in the middle of these two percentage figures.

Among the 19 per cent surveyed who told Finder they now did, a quarter bought their bitcoin in 2020 and a further fifth in the first two months of this year.

Bitcoin’s stratospheric rise last year which saw its price soar to just under $30,000 by the end of the year, and to more than $50,000 this year has been driven by larger institutional investors and interest from payment firms but has seen an increasing number of everyday traders jump on the bandwagon. 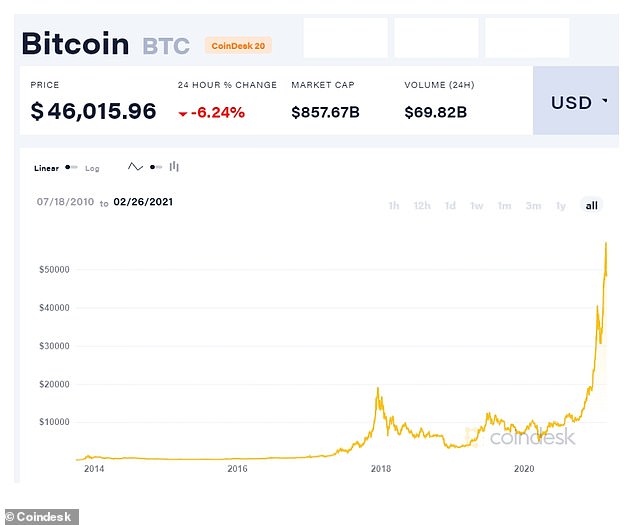 eToro and Revolut, which allow everyday British investors to buy and sell bitcoin, told This is Money they had seen big increases in applications and the number of customers in December, when bitcoin reached a new all-time.

Meanwhile Coinbase, Britain’s most popular exchange, saw its customer services come under strain in the second half of last year and early 2021 as both old investors and newcomers flocked to the platform to trade as the cryptocurrency surged in value.

The exchange, which plans to become a publicly-listed company, saw its revenues more than double last year to $1.3billion.

‘eToro onboarded 5million new customers in 2020 globally, with a further 2million joining so far this year who are coming to invest in cryptoassets, stocks, or to copy other investors’, Simon Peters, an analyst at eToro, said. 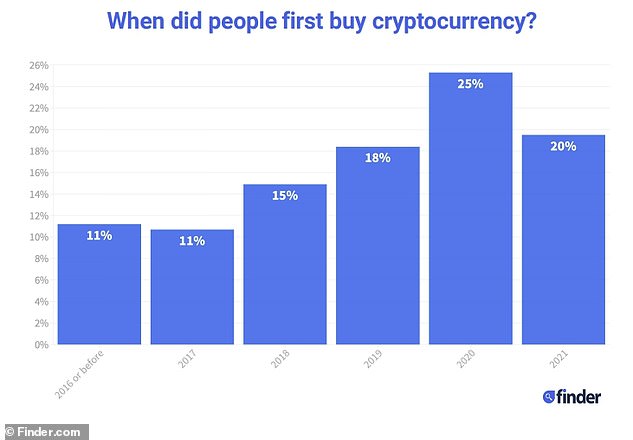 Of the 19% of people who said they now held bitcoin, 45% have bought it in the last two years

‘This increase in interest for crypto and other assets means the direction of travel is clear – bitcoin and cryptoassets in general are becoming more mainstream and held by more investors.’

However, he expressed doubts as many as 19 per cent of the country now held cryptocurrency, even if there had been a surge in interest.

‘Out of 7.8billion people on the planet, there are only about 35million bitcoin addresses actually holding coins and individuals can have more than one bitcoin address. While it’s possible we may see a fifth of Britons holding bitcoin in future, it won’t happen any time soon.’ 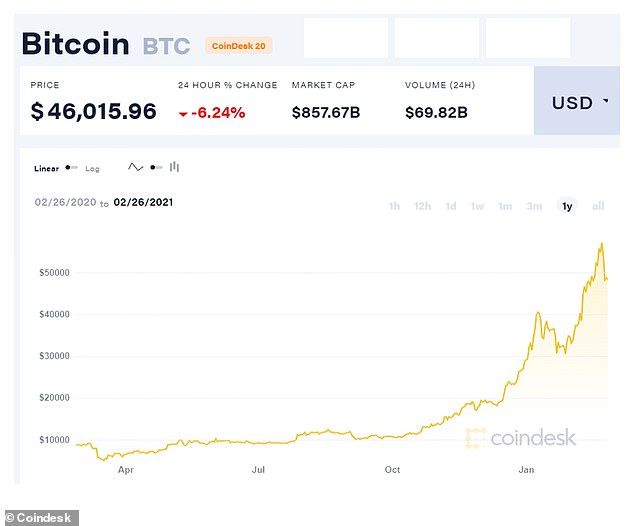 But the surge in trading has raised concerns among regulators and commentators that another 2018-esque crash in the price of bitcoin could leave everyday investors seriously out of pocket.

‘Investing in cryptoassets, or investments and lending linked to them, generally involves taking very high risks with investors’ money’, the FCA warned last month. ‘If consumers invest in these types of product, they should be prepared to lose all their money.’

Finder’s survey found seven in 10 respondents still had no intention in buying bitcoin, with many believing it still posed too much of a risk, something Rich said was an attitude shared by many of his friends. 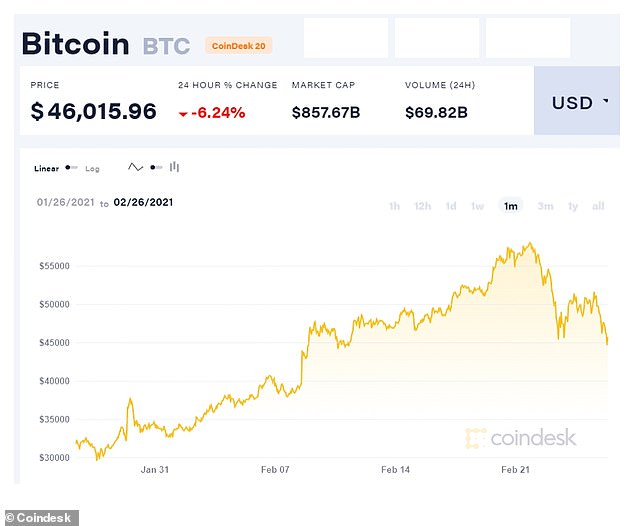 ‘Most of my friends still don’t understand cryptocurrency so stay well clear, the ones that do still say it’s still niche and a big risk’, he said, although he added his former brother-in-law also made some profits.

Asked if he felt he was likely to hit his goal to be mortgage-free by 40 on the back of a continued rise in the price of bitcoin, Rich said: ‘I would love to say yes however I think it may be extremely close.

‘If, and it’s a big if, bitcoin and my investments continue to rise then yes, it’s a distinct possibility, but with the coronavirus, and no doubt massive financial changes coming from the Chancellor in the future it’s anyone’s guess.

‘I’m getting ever closer to having the mortgage paid off, but I have the date stored when I’ll be pulling it all out regardless of the amount which is when my mortgage term is up, and I’ll pay whatever the amount is off.’

Q&A: THE INS AND OUTS OF BITCOIN

You’ll often hear it described as a cryptocurrency, which isn’t very enlightening. In simple terms, it is virtual money, with no physical notes or coins. It was invented by someone claiming to be called Satoshi Nakamoto and to be Japanese, but his or her real identity is unknown. In its early days it was often used for illicit activity but bitcoin has become attractive to ordinary investors.

HOW DOES IT WORK?

Bitcoins are stored in a digital wallet on smartphones or computers. Transactions are recorded on Blockchain, the giant online ledger behind the currency. You can in theory use bitcoin to pay for goods and services, though they are not accepted everywhere. Or you can buy it in the hope of a profit.

WHERE CAN YOU BUY IT?

Anyone with access to a computer or smartphone can buy bitcoin through an exchange. You will have to pay trading fees on top of the cost of the bitcoin itself.

WHAT IS IT WORTH?

Bitcoin is not backed by any tangible asset or underlying commodity such as gold, so it has no intrinsic value. It is ‘worth’ what people are prepared to pay – and that has been extremely volatile. Last March, one bitcoin was worth round $5,000. After a spectacular rally around Christmas, it surpassed $41,000 in the first week of January. It is at $38,000.

It depends on whether you believe bitcoin will rise in value. It’s a huge risk. City watchdog the FCA recently reminded savers that they should be prepared to lose all the money they put into bitcoin, so only invest cash you can afford to lose. If things do go wrong, dealings in bitcoin are largely outside the regulators’ safety nets.

Some links in this article may be affiliate links. If you click on them we may earn a small commission. That helps us fund This Is Money, and keep it free to use. We do not write articles to promote products. We do not allow any commercial relationship to affect our editorial independence.