Bitcoin price has been in a massive consolidation phase showing no bias whatsoever. On the other hand, Ethereum price shows an affinity to move higher but might encounter a minor pullback before the upswing begins. The same holds for Ripple price, which is contemplating a rally.

Mexican billionaire Ricardo Salinas Pliego stated on June 27 in a tweet that his bank is working on accepting Bitcoin.

Soon after, the Mexican Central Bank, along with the Finance Ministry and the country’s banking regulator, issued a joint statement stating,

Virtual assets do not constitute legal tender in Mexico nor are they currencies under the current legal framework.

The country’s financial institutions are not authorized to carry out and offer to the public operations with virtual assets, such as Bitcoin, Ether, XRP and others… Those who issue or offer said instruments will be subject to the applicable sanctions.

While Mexico is not as welcoming as El Salvador, Bitcoin price seems to be consolidating, anticipating a volatile move. Ethereum and Ripple are likely to follow suit if this happens.

Bitcoin price rallied 18% from June 26 to date but has failed to tag the swing high at $35,500 set up on June 25. A sweep of this swing point will indicate that a pullback is likely. However, a decisive 4-hour candlestick close above $35,500 or $35,608, aka the 50% Fibonacci retracement level, would signify the start of an uptrend.

Therefore, investors need to be cautious of the indecisive state of BTC right now.

These pullbacks will form the foothold from which a new uptrend is likely to evolve. Therefore, market participants can expect an 8% rally to the 50% Fibonacci retracement level at $35,608.

If the buyers slice through the said barrier, BTC might continue the climb to the subsequent supply level at $37,331.

Either way, these retracements help buyers accumulate ETH at a discount, preparing to move higher. Therefore, investors can expect a spike in buying pressure that catapults Ethereum price to $2,271 or the 50% Fibonacci retracement level at $2,318. 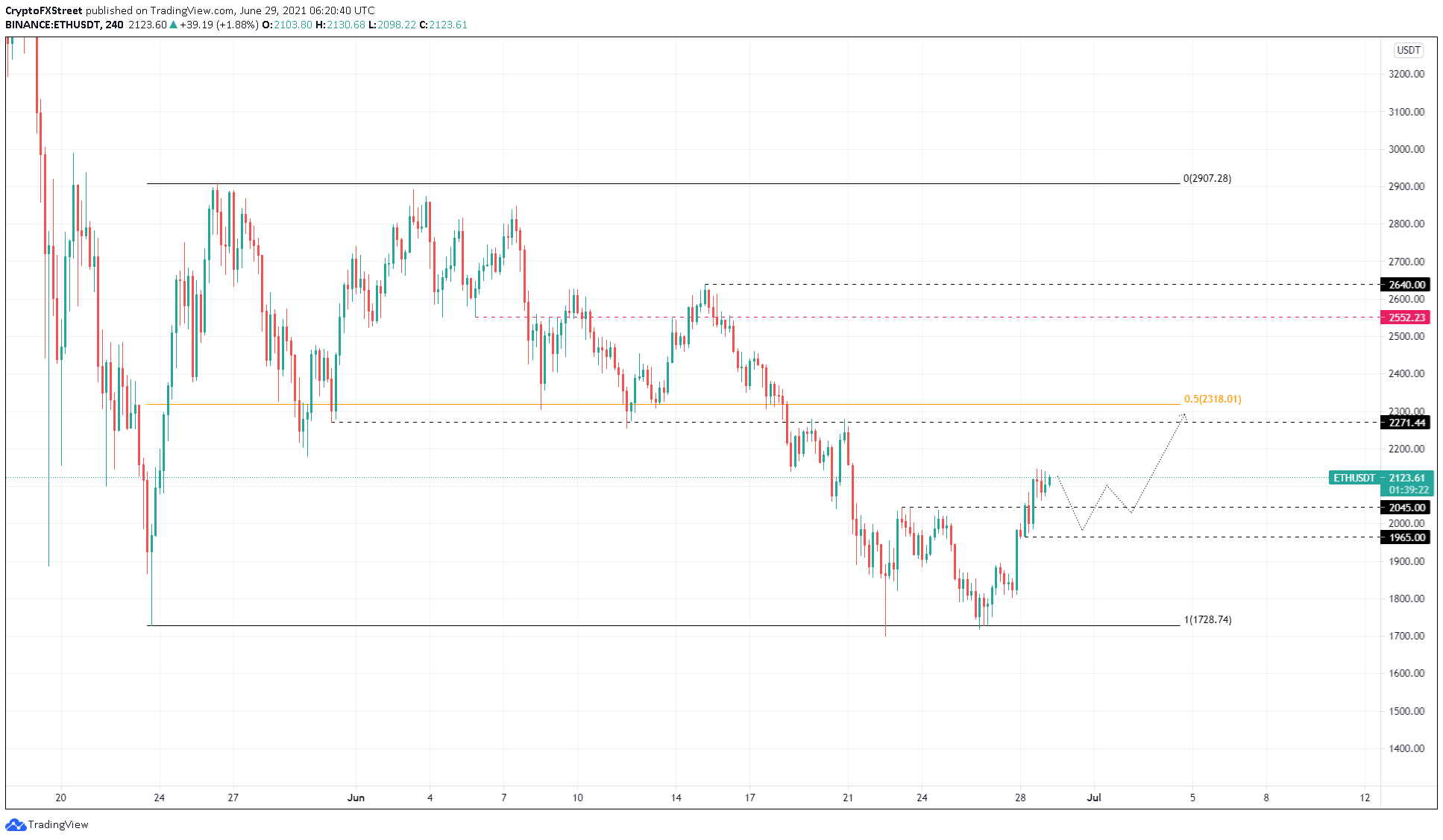 Regardless of the bullishness witnessed in BTC price, if Ethereum price fails to reclaim $1,804, it will invalidate the bullish scenario and trigger a steeper downtrend.

Ripple price has sliced through the range low at $0.65, suggesting a bullish presence while the rest of the market is consolidating. However, there is a possibility that the recent run-up could end up like the attempt on June 24, so investors need to exercise caution.

Considering how BTC and ETH look primed for a pullback, XRP price might also head lower to retest $0.596 or $0.581 before successfully flipping the range low at $0.65 into a support level.

If this were to happen, XRP price would have an opportunity to ascend 15% to tag the 79% Fibonacci retracement level at $0.745.

However, in a highly bullish condition, if the bid orders continue to pour in, Ripple will likely retest the 70.5% Fibonacci retracement level at $0.783. 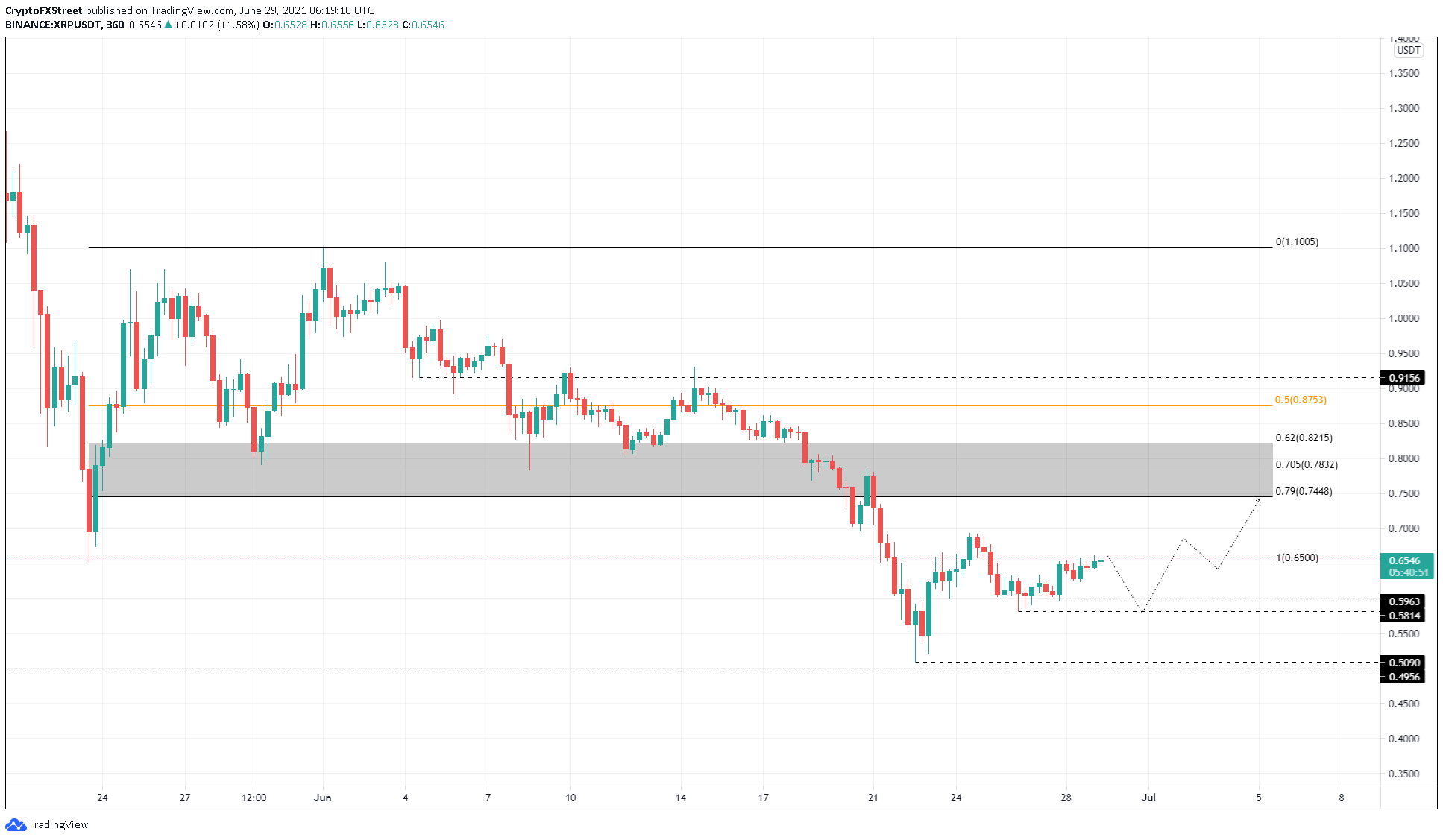 On the other hand, if XRP price slices through the support levels at $0.596 and $581, it will invalidate the bullish scenario and signal a solid affinity to continue the sell-off.