When Coinbase (NASDAQ:COIN) listed directly on the Nasdaq on April 14th, the move was heralded as a watershed moment for the world of cryptocurrencies. However, what followed the popular exchange’s arrival was a harsh pullback on the value of Bitcoin and various altcoins that contributed to Coinbase’s struggles to find its feet on Wall Street. Now, as Bitcoin shows signs of fighting back, is COIN ready for a revival? 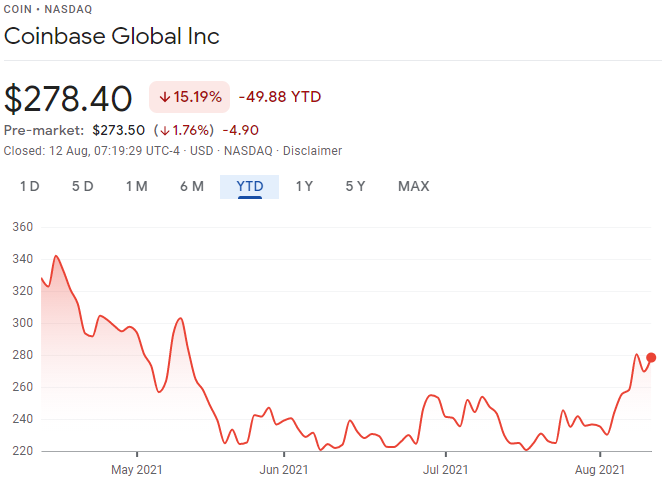 However, we can see that COIN’s strong arrival was short-lived, and that the stock fell sharply in late April and mid-May 2021 – plunging to $220.61 twice over the summer months.

The fall coincided with a harsh Bitcoin pullback which saw the cryptocurrency shed 50% of its value from its springtime peak of $65,000. These market-wide crashes were expected to become less impactful following the listing of Coinbase, with the major cryptocurrency arrival on Wall Street anticipated to bring greater levels of validation to the crypto ecosystem.

“The Coinbase IPO is potentially a watershed event for the crypto industry and will be something the Street will be laser-focused on to gauge investor appetite. Coinbase is a foundational piece of the crypto ecosystem and is a barometer for the growing mainstream adoption of Bitcoin and crypto for the coming years,” explained Wedbush analyst Dan Ives.

Despite a difficult start to summer, Coinbase is enjoying something of a resurgence in August, with prices creeping back above the company’s initial listing price of $250 at the beginning of the month. Could we be looking at the start of a revival for COIN?

Bitcoin’s influence over the world of cryptocurrencies is clear. The world’s best known digital coin has been the dominant force on the market since its creation in 2009, with only Ethereum coming to within 7% of BTC’s total market share momentarily in June 2017.

This shows that other cryptocurrencies simply exist in Bitcoin’s orbit, but Coinbase’s early performance on the Nasdaq appears to suggest that BTC also has a key influence over traditional stocks that are based in the crypto landscape. 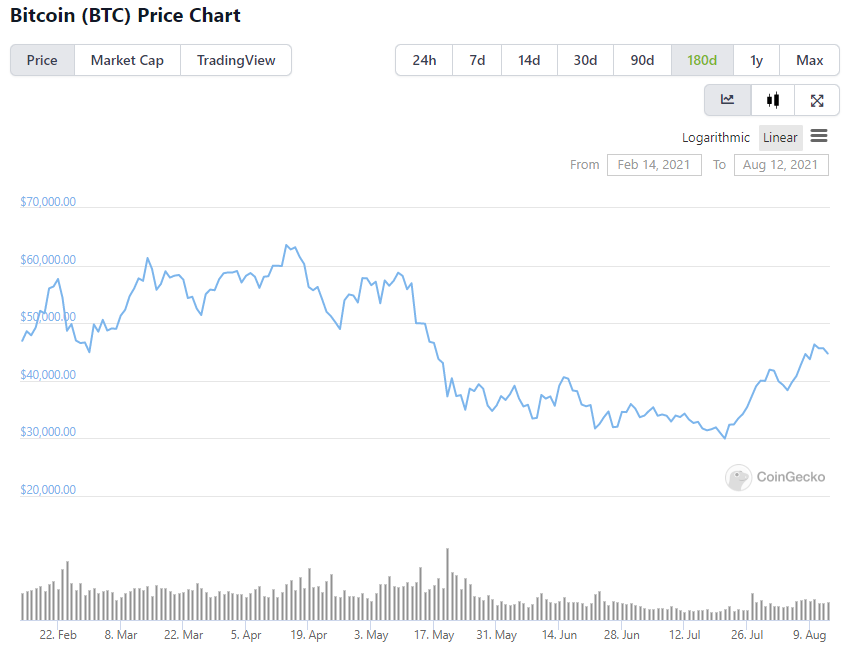 As Bitcoin’s price chart shows, there is an extremely strong correlation between the cryptocurrency’s performance and that of Coinbase upon its Nasdaq listing. 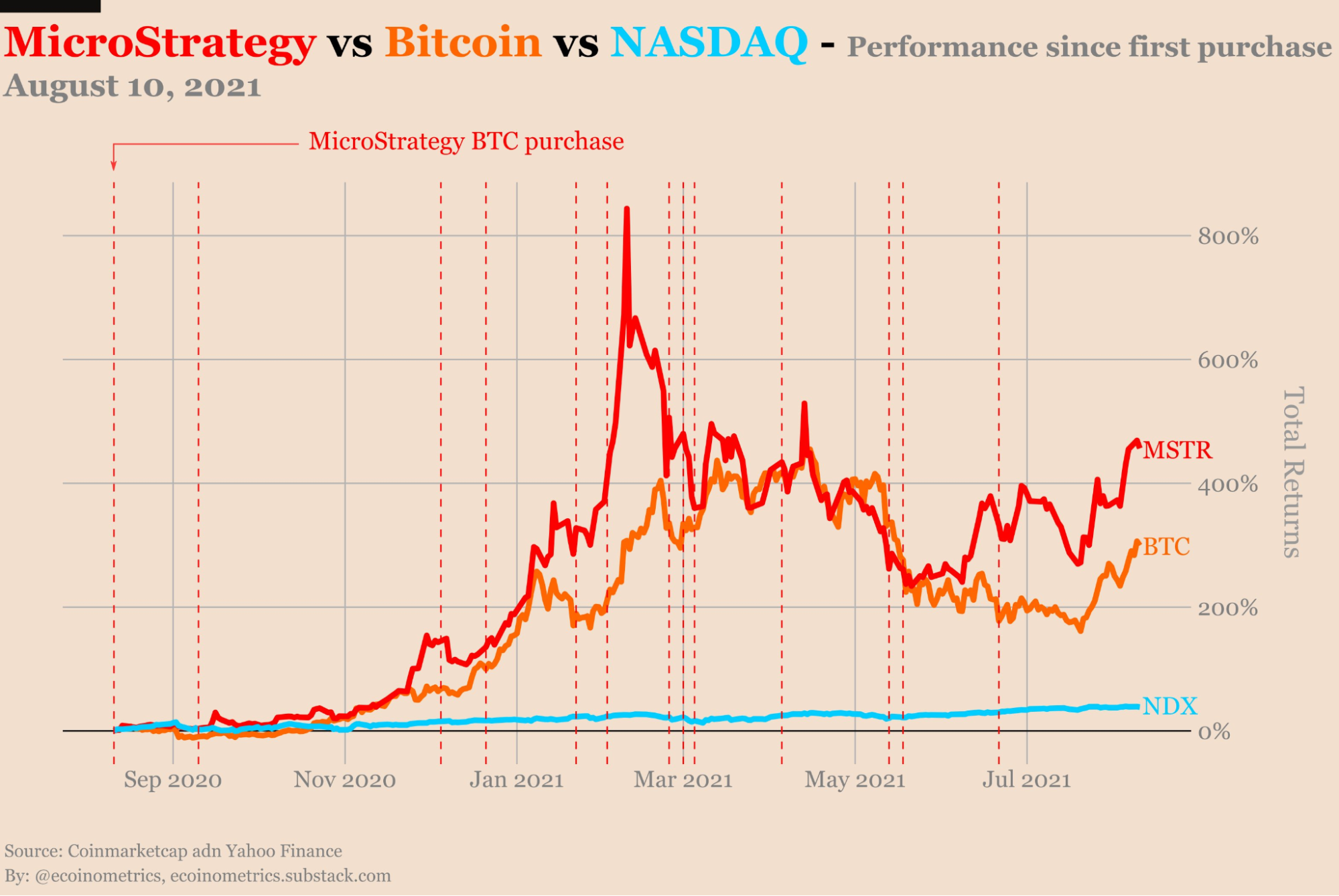 In this respect, it appears that Coinbase is being influenced in a similar way that large institutional investors are being influenced by the cryptocurrency. In the case of MicroStrategy, which currently holds $4 billion worth of BTC at the time of writing, we can see the performance of the public company’s stock largely remaining close to Bitcoin in terms of correlation.

Although having performance largely pegged to that of Bitcoin may lead to more volatility in the future for Coinbase, it seems as though it’s part of the package for a company that’s largely built on the buying and selling of BTC.

As Maxim Manturov, head of investment research at Freedom Finance Europe notes, “the crypto market lacks stability and can start being regulated any time, which actually already happened in China. In June, the Chinese government banned banks and payment systems from using Bitcoin, which led to a temporary collapse of the flagship crypto’s price.” This signifies how the market can aggressively decline as well as grow based on external factors.

However, with market experts like Bloomberg anticipating the 2021 Bitcoin bull rally to resume in the latter part of the year, this reliance on the performance of BTC may lead to the stock outperforming its traditional counterparts on the Nasdaq.

All Selling and no Buying

Despite the optimism that BTC could help to drive the value of Coinbase up over the remainder of the 2021 bull market, there appears to be a telling lack of insiders picking up the stock following its listing on the Nasdaq.

In the case of COIN, no Coinbase insiders opted to buy shares after the company’s arrival on Wall Street. This can be quite telling because it may mean that insiders think the crypto exchange’s stock is overvalued, too high-risk, that they don’t see much growth for the company on the horizon.

Furthermore, a lack of insider buying may also indicate that one of the goals of the company’s listing was to simply cash in its chips, rather than to improve the business itself.

Since the arrival of Coinbase on the Nasdaq, insiders have sold more than $2.6 billion worth of shares, and as the stock dipped to $220.61 there were still no registered insiders purchasing their company stock.

However, it’s also worth noting that insiders do still own a combined 24% stake in Coinbase, but this lack of purchasing movement from inside the company may require prospective investors to take a second look at why there isn’t as much faith in the growth of COIN on the public markets.

Despite these concerns, it’s worth noting that the market has never been so full of cryptocurrency and retail investor adoption of crypto assets and stocks respectively. 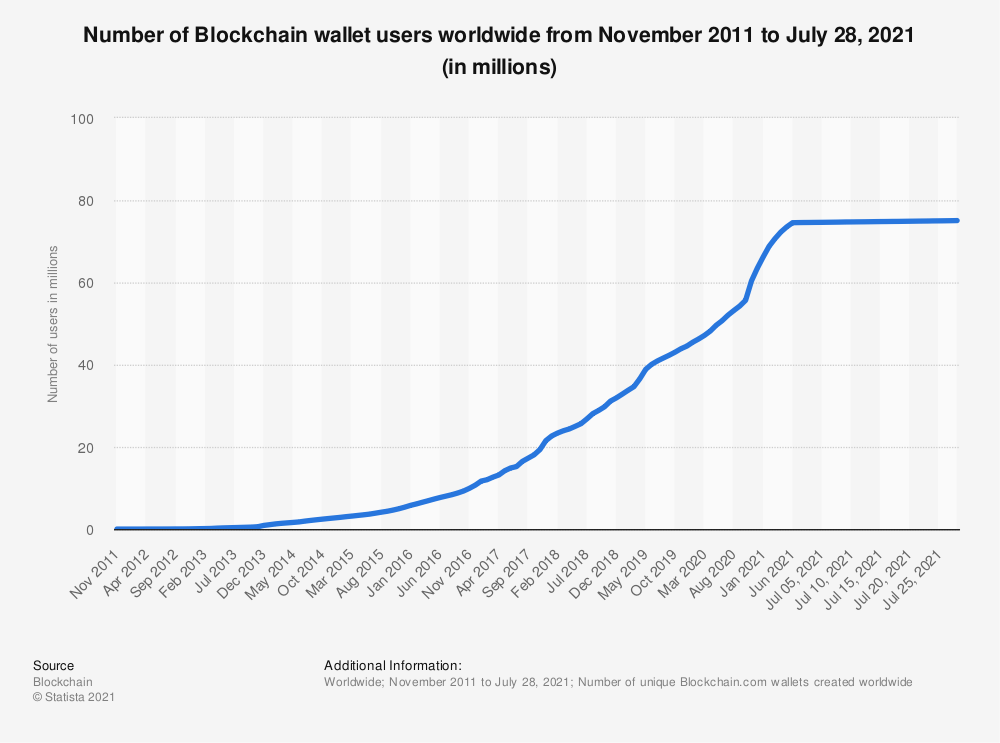 As the chart above shows, blockchain-based wallet holders around the world are climbing to almost 80 million, meanwhile, new retail arrivals on Wall Street have used their Covid-19 stimulus packages to ramp up trading volume in recent months.

Coinbase remains one of the world’s biggest cryptocurrency exchanges and is likely to be at the forefront of welcoming new traders. As Bitcoin continues its recovery into what may be a second bull market, COIN may find more benefits in gaining new investment from the growing number of retail investors arriving on investment apps looking for the brightest new public fintech.

With this in mind, we may be set to see Coinbase consign its troublesome early days on the Nasdaq to the history books and continue its market revival.