CRYPTO STARTUPS CONTINUE TO RAMP UP D.C. PRESENCE: Crypto exchange Coinbase hired a fifth outside lobbying firm this year, according to a disclosure from July filed this week. WilmerHale’s Rob Lehman, a former chief of staff to Sen. Rob Portman (R-Ohio) and a former chief of staff at OMB and USTR, lobbied for Coinbase on cryptocurrency legislation, the filing shows, though Lehman told PI he is not actively lobbying for the company on any issues right now.

— Coinbase is one of several crypto startups whose lobbying expenditures soared last quarter, as your host reported earlier this week, a lobbying boom that coincided with a provision in the Senate’s bipartisan infrastructure bill that would introduce new reporting requirements on digital currencies. The requirements — which the industry had sought to work with lawmakers on and rushed to try and change, complaining they were too broad and would sweep up intended players in the crypto ecosystem — were authored by Portman, one of the key negotiators on the bill.

— Though Portman eventually backed changes to the language offered by a bipartisan group of senators, it was never amended in the bill for procedural reasons and the original provision will likely remain in the bill if it reaches President Joe Biden’s desk. Coinbase dropped $625,000 on lobbying last quarter, and also retains Rich Feuer Anderson, Franklin Square Group, Mayer Brown and Tiger Hill Partners.

— Meanwhile the blockchain company Ripple launched a six-figure campaign looking to educate policymakers, regulators and analysts about the industry, as top lawmakers call for crackdowns and government officials spar over issues as basic as which agency claims jurisdiction over cryptocurrencies. The campaign, which includes a website touting “what’s real about crypto,” will also include ad buys across outlets in Washington.

— And The New York Times’ Eric Lipton, Daisuke Wakabayashi and Ephrat Livni have more on the recent lobbying blitz by Andreessen Horowitz’s high-powered advocacy team, which involved five days of meetings in Washington with lawmakers, White House aides and a regulator as the venture capital firm works to dominate the rapidly growing industry — and have a major hand in shaping how it’s governed.

Happy Friday and welcome to PI. Send lobbying and K Street tips, especially as you peruse the reconciliation text: [email protected]. And be sure to follow me on Twitter: @caitlinoprysko.

American families deserve access to affordable, high-quality health coverage and care to help them get healthy and stay healthy. Let’s build on and improve what’s working in health care – not start over with an unaffordable, new government-controlled health insurance system like the public option or by opening up Medicare to younger Americans. Learn more.

FARA FRIDAY: Welcome back to our occasional roundup of Foreign Agent Registration Act filings that caught PI’s eye. Former Sen. Mark Pryor (D-Ark.) registered as a foreign agent for the first time this week. Pryor, a former Senate colleague of Biden’s who joined Brownstein Hyatt Farber Schreck last year just before the election, will represent the Kingdom of Cambodia, for whom Brownstein has lobbied since 2019.

— “As with many clients and issues, Covid has made it tougher to engage,” Brownstein’s Al Mottur, who also works on the Cambodia account, said in an interview. Therefore “a lot of the relationship building has had to take a step back.” Ultimately, he said, the kingdom “wants to have a stronger relationship with the United States,” though Mottur suggested Pryor’s relationship with Biden was not a factor in his joining the account.

— Ali Nazary, Afghan resistance leader Ahmad Massoud’s head of foreign relations and spokesperson, also registered as a foreign agent this week, DOJ filings show, boosting the resistance’s presence in Washington after the bungled withdrawal of U.S. troops and the country’s fall to the Taliban. Nazary registered to represent the International Representation of The National Resistance Front of Afghanistan, a nonprofit incorporated in Washington last week, on a pro bono basis to “advocate for the support of freedom, justice, and democracy in Afghanistan through active outreach to Congress, the Administration, and the American people,” according to the filing.

— Last month, the National Resistance Front, the opposition group led by Massoud, inked a contract with Sonoran Policy Group’s Robert Stryk to help opposition leaders win recognition (and aid) within the U.S. and elsewhere around the globe. Stryk told PI at the time that Massoud, the son of a legendary Afghan commander, has “the hearts and minds of the Afghani people,” unlike the Taliban. In the group’s newest filing, it touts itself as “a trusted source of information about security, humanitarian, and political developments in Afghanistan and Central Asia” and said it will seek to promote the National Resistance Front as “the protector of America’s 20-year investment in Afghanistan and the force to rid the country of intolerance and terrorism.”

DRUG PRICING RUNS INTO PHARMA’S BUZZSAW: “Democrats control Washington and their proposal to let the government negotiate drug prices is backed by more than 80 percent of the public. But, like many before them, they have so far failed to prevail over the pharmaceutical industry and pass a plan that directly addresses the price of drugs for most Americans,” POLITICO’s Alice Marie Ollstein, Megan Wilson and Hailey Fuchs report. The sweeping social spending package before Congress remains a work in progress and four industry lobbyists told POLITICO they aren‘t celebrating just yet. But President Joe Biden’s Thursday pitch to Capitol Hill eliminates any effort to crack down on drug prices, a coup for the industry that has spent months pouring millions into lobbying and advertising campaigns.

ODD BEDFELLOWS: United by Interest, the bipartisan, majority-minority-owned public affairs shop whose partners include GOP lobbyist Sam Geduldig and Democratic lobbyists Mike Williams and Jennifer Stewart, is looking to put together an otherwise unlikely coalition of lawmakers to pass legislation aiming to streamline the reentry into society of individuals who’ve completed their sentences for nonviolent drug-related crimes. The Clean Slate Act, introduced by Sens. Bob Casey (D-Pa.) and Joni Ernst (R-Iowa) in the Senate and Reps. Lisa Blunt Rochester (D-Del.) and Guy Reschenthaler (R-Pa.) in the House, would create an automatic sealing process for nonviolent drug-related crimes and a petition process for sealing other qualifying, nonviolent crimes.

— United by Interest, on behalf of a dark money nonprofit called Futures Restored, conducted polling on the issue earlier this month in the 100 wealthiest and 100 poorest congressional districts in the country, which tend to be represented by members of the Congressional Black and Hispanic caucuses on the Democratic side and the Republican Study Committee on the GOP side, to underscore support for the bill across a broad swath of demographics.

— “We, for a long time, have been trying to build coalitions with the Freedom Caucus and the Black Caucus to show that you know, when you can align those two on issues involving” the kinds of inequities that both types of districts have in common, Geduldig, the co-CEO of CGCN Group, told PI, referring to the uber conservative House Freedom Caucus. The polling showed that roughly equal numbers of constituents in the districts agreed with the broad aims of the bill and the underlying rationale, Geduldig said, which is “that it’s not fair that people that can’t afford to have some of these things expunged don’t,” which “puts them at a disadvantage with people that were able to afford a lawyer and maybe got the charges dropped or expunged or sealed.”

— Williams said in an interview that the bill, whose backers range from the conservative Americans for Tax Reform to the liberal Center for American Progress, is likely to be included in a package of similarly noncontroversial criminal justice measures that he is confident will be taken up sometime this Congress, adding that support for similar bills at the state level is a boon to the effort. “There are so many people who are struggling economically, and, you know, people having interactions with the criminal justice system adds to that exponentially,” he said. “It does matter whether or not you’re in Appalachia, or if you’re in the Bronx.” 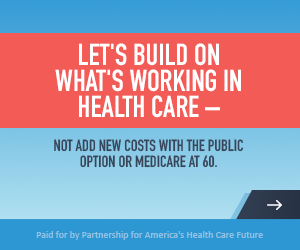 SMALL BUSINESS GROUPS FORM ANTITRUST COALITION: A coalition of trade associations representing small businesses across an array of different sectors launched an effort Thursday to revive enforcement of a little-used antitrust law, pressing the FTC to help counter the “incredible power and influence” of a “handful” of companies “at the expense of small and medium sized businesses and ultimately consumers.”

— The coalition is asking FTC to lean on enforcement of the 1938 Robinson-Patman Act, arguing that the agency hasn’t brought a case under the antitrust statute, which “makes it unlawful to ‘discriminate in price between different purchasers of commodities of like grade and quantity’ if the purchasers are competitors,” for two decades.

— “We definitely see a more favorable environment towards more robust antitrust enforcement, particularly with Robinson-Patman,” Chris Jones, the grocers’ senior vice president of government relations and counsel, told PI, pointing to Khan’s academic work and the White House’s invocation of Robinson-Patman in an executive order this summer addressing consolidation across a number of industries. Jones said the coalition was also encouraged by a greater focus around Washington, D.C., on other attributes of competition, such as product quality, product diversity and convenience, “that have been neglected in the past” and which the group asks in its letter to the Khan be accounted for in a study on anticompetitive economic discrimination.

— Jennifer Lowe, Boeing’s vice president for national strategy and engagement, is leaving the company after 12 years, according to an email from the company’s top lobbyist Ziad Ojakli sent to employees and obtained by PI.

— Skiffington Holderness will be a director of government relations at Delta Air Lines starting on Monday, Nov 1. Holderness is a longtime aide to Sen. Jim Risch (R-Idaho), a former staff director of the Senate Small Business Committee and most recently has been on staff of the Senate Foreign Relations Committee.

— Latham & Watkins has announced nine promotions in its D.C. office: Morgan Brubaker, Christopher Clark and Rebecca (Reba) Rabenstein have all been named partners and Jonathan Drory, Monica Groat, William Hackett, Matthew Peters, Andrew Galdes and Eric Merrill have been all been named counsel.

— Patrick Hillmann is now chief communications officer at cryptocurrency exchange company Binance. He most recently was global head of innovation for crisis and risk at Edelman.

— Riva Sciuto is now head of communications for Google Assistant. She most recently was manager for global communications and public affairs at Google.

— Richard Hoar has joined LobbyIt as executive vice president. He was previously senior vice president at Banner Public Affairs and is an alum of Rep. Gus Bilirakis (R-Fla.) and the House Education & Labor Committee.

— Matt Hadro is now senior account executive at Pinkston. He most recently has been political editor at Catholic News Agency.

Government-controlled health insurance systems – like the public option and Medicare at 60 – could increase costs for patients and threaten access to the quality care Americans rely on.

Lawmakers should build on and improve what’s working in health care where private coverage, Medicare and Medicaid work together, not start over by creating unaffordable, new government health insurance systems. Get the facts.