Ethereum 2.0 is still on the way. We are still waiting for the next launches that will take the next step to the cryptocurrency created by Vitalik Buterin. However, one developer has strongly criticized both this new implementation with proof of stake (PoS) and the rollups, which promise to increase the network’s ability to confirm transactions.

Hugo Nguyen, founder of the Bitcoin (BTC) wallet Nunchuk, has posted a Twitter thread providing arguments against Ethereum rollups. Seeks to show why, according to their analysis, they are not a scalability solution, but rather a system with serious security problems. These problems would be accentuated with the arrival of Ethereum 2.0.

Being a verifier in some rollups (Optimistic or ZK) requires a rather expensive infrastructure since it is necessary to have a layer 1 node and a layer 2 node. These types of scenarios, according to Nguyen, can point to a possible centralization. This is because fewer users will be less willing to invest in having their own node, which would make this layer 2 “end up with no validators at all.”

To the dilemma of having layer 1 and layer 2 nodes, we must add the exponential growth that the Ethereum blockchain has had this last year. The higher the weight, the higher the hardware cost.

On the subject of centralization, Vitalik Buterin himself points out in his recently published roadmap known as End-Game that this scenario is possible due to the cost per node in which the rollups or second coat solutions. However, Vitalik indicates that the centralization that rollups can present can be corrected as long as the base network (layer 1) is strong.

Ethereum 2.0 and the punishment system in Rollups

For Nguyen, Vitalik and the group of developers are trying to create a justice system that “cannot be expressed in code.” This is because with Ethereum 2.0 a new system will arrive that will punish malicious nodes by removing part of the ETH deposited in the staking.

This system will bring justice to those nodes that try to create malicious transactions. However, there is a serious problem pointed out by Nguyen and that is who is punished and who benefits.

The developer points out that, in this system, the validator node that detects the “scam” is the beneficiary and not the victim. This is because the funds from the malicious node (discounted as punishment) are paid to the validator and not to the address of the person who could have been scammed. 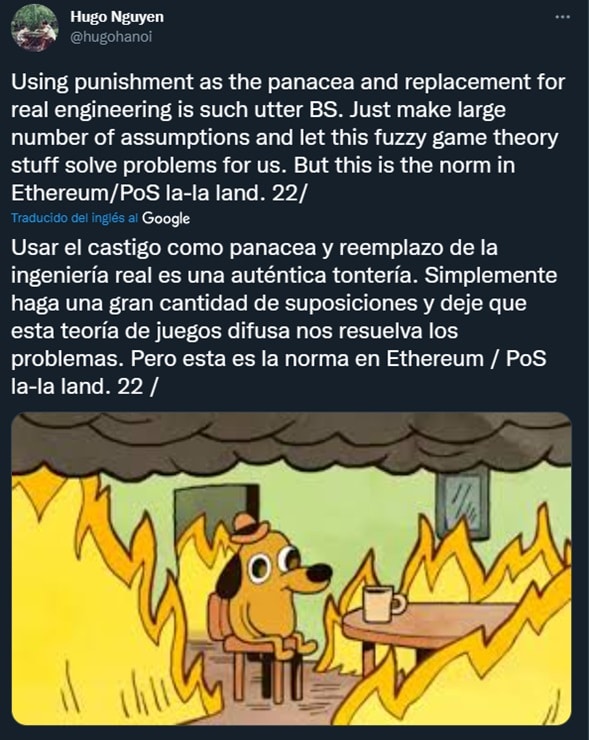 In the thread (of more than 50 tweets), Nguyen sums up that rollups are not a scalability answer. Take Plasma as an example, another second layer solution created by Vitalik himself, which was abandoned. Rollups could have the same fate, according to the creator of Nunckuk.

He points out that search for solutions doesn’t really take anything for granted. In a problem A, they look for a solution B, which also has problems, for which it presents a solution C, which also has vulnerabilities, which is creating an unstable network, he explains.

Vitalik Buterin, for his part, has bet a lot on rollups, both in the current Ethereum 1.0, as some define the network currently with proof of work (PoW), and more in what will be Ethereum 2.0. The Russian-Canadian developer has even put together roadmaps outlining how these solutions could contribute to network growth, which remains to be seen.