Those Super Bowl ad spots paid off for a number of tech companies not just in terms of exposure, but also app installs, a new report indicates. But Coinbase’s viral ad — which just bounced a QR code around on a black screen like the old DVD screensaver — outperformed the group, with installs jumping 309% week-over-week after the ad’s airing Super Bowl Sunday, February 13, and it continued to climb by another 286% the following day.

The new data comes from app intelligence firm Sensor Tower, which crunched the numbers to see how well the Super Bowl ads performed for the mobile-first brands that advertised during the big game. While the firm can’t share the actual download figures due to non-disclosure agreements with clients, its data can provide a look at what sort of impact these ads had. (This data is for U.S. app stores only.)

Coinbase, as it turned out, wasn’t the only crypto app to do well. Among the top five apps whose ads delivered strong download growth, three were crypto apps. In addition to Coinbase, crypto trading platform eToro grew app installs by 132% week-over-week on Feb. 13, and by 82% on Feb. 14. Meanwhile, Cryptocurrency exchange FTX, whose ad featured “Curb Your Enthusiasm” star Larry David, saw a 130% boost in downloads week-over-week on Feb. 13, followed by 81% growth the next day.

Combined, Coinbase, eToro, and FTX saw their U.S. installs grow by a collective 279% on February 13 compared to the week prior. This continued into the following day, when week-over-week download growth reached 252%. 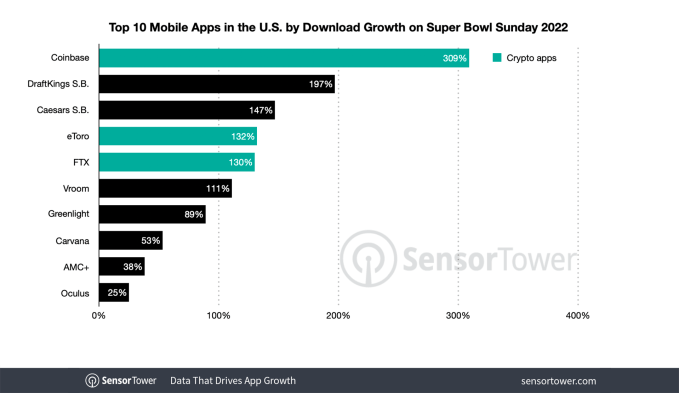 While download growth is one signal of the advertisement’s success, another is the app’s rank, which measures a combination of downloads, velocity, and other factors.

In some cases, the brand’s Super Bowl ad prompted an immediate jump in terms of new installs, but not all ads benefitted in the same way. Plus, some apps would have likely seen a boost in installs, regardless of their ad spend — like the sports betting apps or those that had a more practical use, like Peacock and YouTube TV.

But the rank can offer an indication of how popular these brands were before their ad aired.

For example, Oculus was ranked No. 102 Overall on the U.S. iOS App Store on Saturday and only moved to No. 100 on Sunday, then fell even lower on Monday to No. 175, according to data from Apptopia. That shows that even if it saw 25% download growth, as Sensor Tower says, it didn’t drive a large number of new users to try the app.

Per Pathmatics’ data, the top 10 advertisers by spend on over-the-top video platforms like Peacock, Paramount+, and Hulu, were mostly traditional brands. Weight Watchers, for example, spent approximately $1.4 million in marketing on those streaming services, while Volvo and Nike spent $1 million+ and $623,000, respectively. Grocery tracker Basketful — the only one in the top 10 that was a mobile-first brand — spent approximately $486,000. It was followed by Geico, which spent around $413,000. 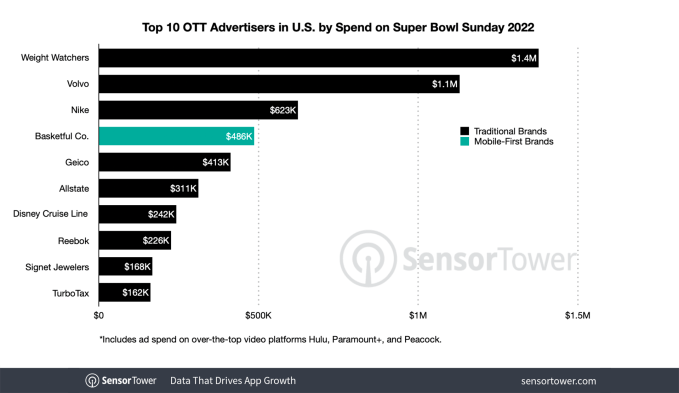